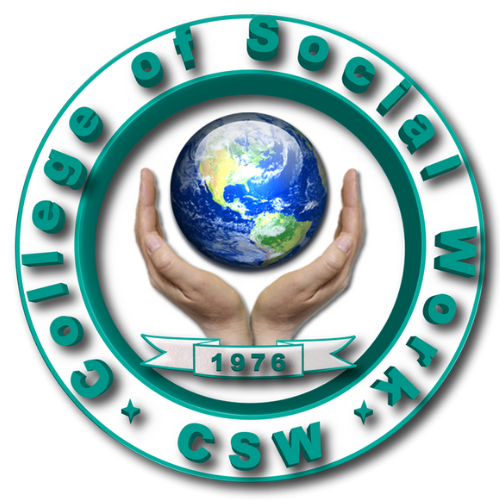 The University of Northern Philippines, the oldest university in the North, offered Social Work in response to the rising demand by both government and non-government organizations for professional social workers in the early 1970s. It was initially offered as a major of Bachelor of Arts (AB) in the College of Arts and Sciences in 1976. It became a full degree program in 1978 with the establishment of the then Institute of Social Work and Community Development (ISWCD). The ISWCD, thus, saw its first batch of graduates in Class 1980, comprised of two males and twelve females with one graduating as magna cum laude.

With the tremendous increase in enrolment coupled by the increasing percentage in the performance of the graduates in the Licensure Examination for Social Work, as well as the accreditation of the program to Level II status, efforts were initiated to make Social Work stand as a separate unit. On June 17, 2015, Board Resolution no. 60, s. 2015 granted Social Work an independent status, thus the College of Social Work. On December 1, 2015, an OIC dean was designated, Mrs. Melody T. Gacita who is also an accomplished member of the UNP accreditation team. Worth mentioning as well are the key figures who made impressive contribution to the growth and development of the College. Dr. Daniel Colcol was the director of the then Institute of Social Work from 1980-1999 and Dr. Agustin Guinid from 1999-2012. When Dr. Guinid assumed the deanship the Institute of Social Work was already known as College of Social Work.

The College of Social Work is housed along with the College of Criminal Justice Education at the Lauro Tacbas Building. It has spacious and well-ventilated classrooms, a student center, a multi-purpose function room, clean comfort rooms and air-conditioned faculty rooms.

Most of the CSW graduates find employment primarily in government and non-government agencies. In local government units, its alumni are employed at the municipal, city, or provincial Social Welfare and Development Offices. Others also found employment in hospitals as medical social workers, in rehabilitation centers and mental health institutions as clinical social workers, in the courts as court or adoption workers, and in private social welfare agencies as institutional workers or community organizers. Graduates who pursued higher studies and obtained master’s degrees occupy supervisory or administrative positions in the government and non-government institutions, or have gone abroad to work as social workers in orphanages, home for the elderly, and in other social welfare related centers/institutions. Social Work graduates are also employed in drug rehabilitation centers, in the Philippine National Police to man the women’s desks, or as regular members of the police force. Experienced social workers are now being recruited to work in foreign countries such as the United Kingdom, Canada, Netherlands, and the United States of America, among others. These are just a few of the many opportunities available to social workers.

At present, the College takes pride that almost one hundred percent of its most recent batch of graduates are employed both in government and non-government agencies.

Goal
The goal of the College of Social Work is to produce world-class professionals in community service.

Objectives
The College aims to:
1. Train generalist social work practitioners by creating an environment that offers value oriented learning emphasizing self-assessment, service to community, self-determination, social justice, and respect for diversity.
2. Meet the demands of the government and the private sector for competent social workers to manage their social and civic oriented programs and services.
3. Develop proficiency in the use of social work tools, skills, strategies, and techniques among future social workers.
4. Deploy field work students to agencies which can provide opportunities for them to critically analyze problems or issues and apply the knowledge in problem solving which they learned in the classroom.
5. Train students in documentation through case recording, case management, and oral and written communication.
6. Prepare future social workers in advocacy works along the prevention and reporting of any kinds of abuses, safeguarding of human rights, promotion of social justice, and respect for human worth and dignity.