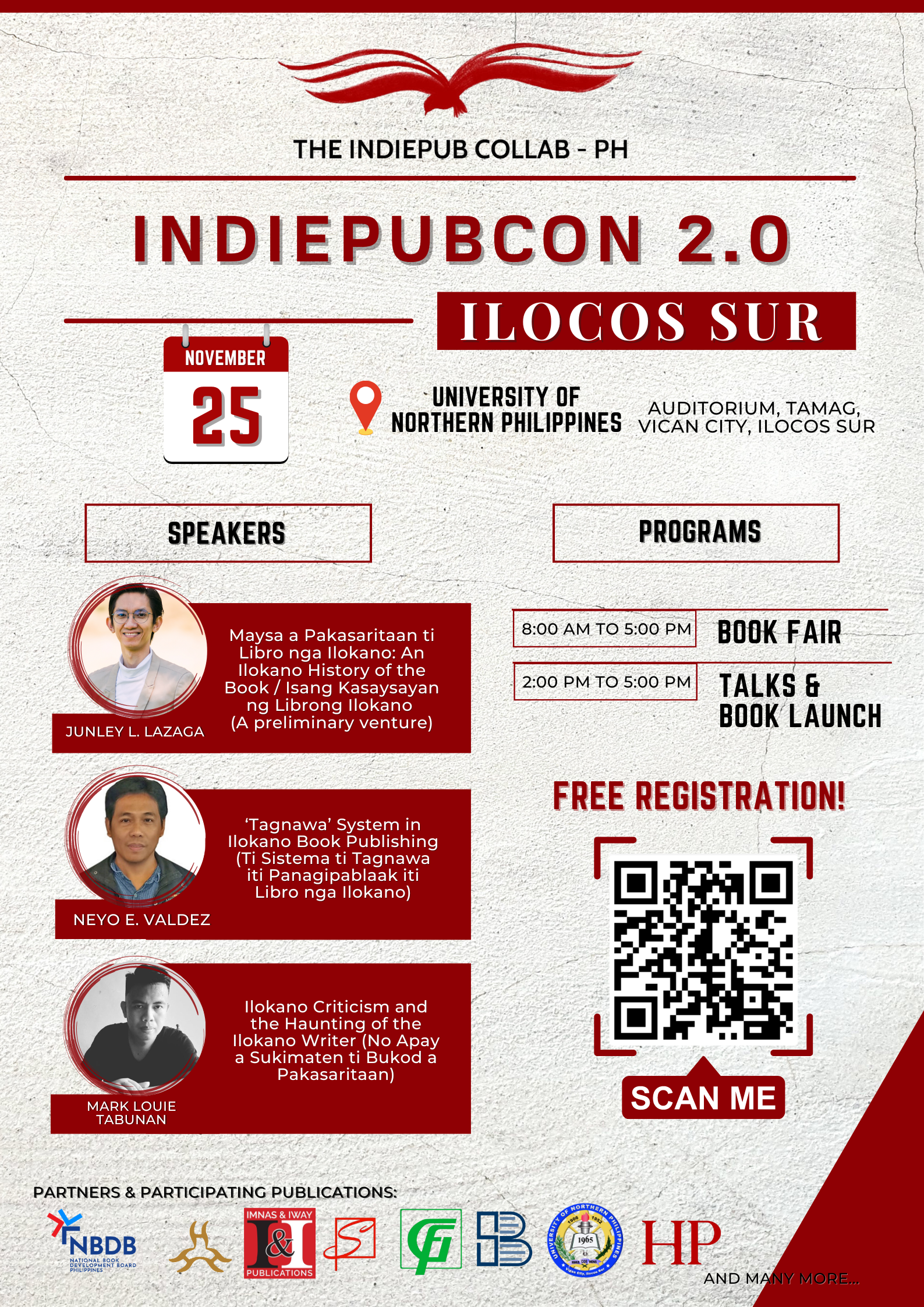 It is divided into four legs, one each for Mindanao, Visayas, National Capital Region, and Northern Luzon. For Northern Luzon, it will be held on 25 November 2022 at the University of Northern Philippines with Saniata Publications, an independent Ilokano publisher, as lead publisher for the event.

The group, through Mr. Ariel Sotelo Tabag (award-winning Ilokano writer, translator, and publisher), has explored the possibility of holding the Northern Luzon event at the University of Northern Philippines, in cooperation with the College of Teacher Education, the Center for Ilokano Studies and University Museum, and the Professional and Future English Teachers Association (Pro-FETA).

The event will start at 8:00 AM. The afternoon program includes talks of three speakers (on Ilokano books, writing, language, and literature) and book launching. The event will be livestreamed in the TIPC PH and GUMIL Filipinas official social media platforms (Facebook, YouTube). The event is free and open to the public.

Below is an overview of the talks and the speakers’ profiles.

In 2015, the first “Libro Ilokano” Ilokano Book Fair was held in memory of Don Isabelo delos Reyes and with the aim to sustain efforts of book production and publishing in Ilokano. This may be regarded as a signpost in Ilokano history of books.

As an area of scholarship, history of books draws from the specialized fields of bibliology, codicology, philology, paleography, textual studies, art history, social history, and cultural history. As such, an attempt at an Ilokano history of the book gives an opportunity to understand not only Ilokano book production, publication, and consumption, but also, equally important, of social and cultural history of print communication and as well as insights to the development of our language and writing system and Ilokano society and culture in general. Among others, a history of the book is a window through which we can view the interrelations of ideas, the printed word, and human thought and behavior. More specifically, it is an avenue in which we can picture the landscape of our literary history which intersects with the linguistic and trans-linguistic, cultural and cross-cultural, political, and economic aspects of our lives and collective experiences.

This paper mainly circles back to the book publications of Don Isabelo and primarily presents a list of Ilokano books as cultural artefacts necessary in the updating of Ilokano literary history and in understanding of our book history. This undertaking aims to identify books as signposts and milestones of Ilokano history and proposes the Libro Ilokano contribution to an outlook for Philippine book industry in the twenty-first century.

Junley L. Lazaga writes in Filipino, English, and the language of his birth, Ilokano. He is Associate Professor of Literature at the University of the Philippines Baguio where he finished his BA and MA degrees in Language and Literature and has served various leadership roles for over a decade. He won first prize in a poetry competition in 2010 and is also an awarded educator at the University of the Philippines where he has been conferred the title of University Artist.

Tagnawa (cooperative labor) is an Ilokano practice of coming together of members of a close-knit community to help one another during  times requiring voluminous work, without thinking monetary remuneration in return. The Ilokano writers, since late 1960s, have been the using the tagnawa system to publish anthologies of their selected works, where they pooled their own resources to pay the printer and divide the copies among themselves, with each one expected to sell his share to get his capital back (though most, if not all, parties in the tagnawa consider the publication as more important than material gain). The system in fact started the independent publishing. The talk centers on the members of the GUMIL Filipinas (Ilokano Writers Association in the Philippines and Abroad) who devised the system, working hand in hand to publish a books, thereby fulfilling one of its major objectives, to enrich Ilokano literature by publishing books of poetry, short stories, essays, novels, plays, and other writings.

Neyo E. Valdez is a freelance writer and editor of various publications (online and print). He has authored three books in Ilokano fiction and a book of his collection of Ilokano essays. He is currently the Chief of the Planning, Programming and Evaluation Division of the Corporate Planning Department of the National Tobacco Administration, an attached corporation of the Department of Agriculture. He is an Executive Member for Northern Luzon of the National Committee on the Literary Arts of the National Commission on Culture and the Arts, and the Secretary General of the GUMIL Filipinas (Ilokano Writers’ Association). He earned his AB English degree from the University of Northern Philippines in Vigan City and Bachelor of Laws from the Polytechnic University of the Philippines in Manila.

Ilokano Criticism and the Haunting of the Ilokano Writer,

Ilokanos’ travails through the iterations and detours of time have left them, in Resil Mojares’s words, adrift in a sense of hauntedness. They are “touched by the spectral presence of absence, to catch the miasmic whiff of the unburied dead, the traces of what has been silenced and forgotten,” a problem of their kararua. This haunting is what drives Ilokano writers and the practice of writing, thus the need to carve one’s narrative (pakasaritaan). While rich in literary production, there appears to be, however, a lack of sustained effort on criticism, whether in the forms of popular reviews or scholarly critique, which ought to accompany production. This talk surveys notable scholarly interventions on Ilokano literature and presents trajectories for future engagement. It highlights the need to examine Ilokano pakasaritaan in its as-such-ness, that is within the purview of Ilokanos’ worldview and cultural practices.